With this review, I'm trying to give you an in-depth discussion of the new features in Finale 2011 (compared to Finale 2010). It also contains a number of tips regarding the use of Finale 2011.

Please note that this review is based on the Windows version of Finale 2011.

Yes! The handling of staves and groups is fundamentally different compared to all earlier Finale versions. However, since the changes are pretty self-explanatory the learning curve would most probably be short.

The single largest change in Finale 2011 is probably that the term "optimization" (used in previous Finale versions) is now gone. The systems are always "optimized" (using the old terminology) and there isn't any layout connection with Scroll View anymore. The Page Layout tool is no longer required to control staff layout. There is always only one handle for the staff in Finale 2011.

The staff handling in Finale 2011 is a complete redesign, both in terms of user interface and much of the underlying technology. It affects how staves and groups are handled and, to some extent, it also affects staff systems.

The user interface for repositioning and working with staves works like this in Page View:

Measure regions can also be selected as in previous versions of the Staff Tool, but now the staff handle get selected as well and selected staves in the region move during the staff dragging process. If any measure on a system is selected, that staff's handle gets automatically selected for that system. It's all pretty simple and transparent to the user.

One of the concepts of the new system is that it should now be impossible to accidentally hide measures containing music if the measures move to another system. So to actually hide measures with music (such as in playback staves), the measure have to be "force-hidden" either through changing the staff attribute or applying a staff style.

When force-hiding measures with music, there are now 3 different ways:

To hide staves that has no music (the concept that was called "hide via optimization" in earlier Finale versions), it's accomplished through the context menu of the staff handle or through the Staff menu. The command is called Hide Empty Staves. As in earlier Finale versions, staves and groups can selectively be set to not hide even if they are empty although the references to "optimization" in those settings have now been renamed to "hiding".

When staves have been hidden because they are empty, they will appear as gray dashed horizontal lines with a handle. The handle for hidden staves can't be moved vertically, but it can be selected and it has its own contextual menu:

When dragging staves vertically with the mouse, the distance between all staves is displayed numerically. This is a very welcome addition to provide more accurate staff layout. However, the numerical distances are not displayed while nudging handles using the keyboard, which is. Also please note that the distances displayed are between the staff baselines. It's not possible to display the whitespace distance. 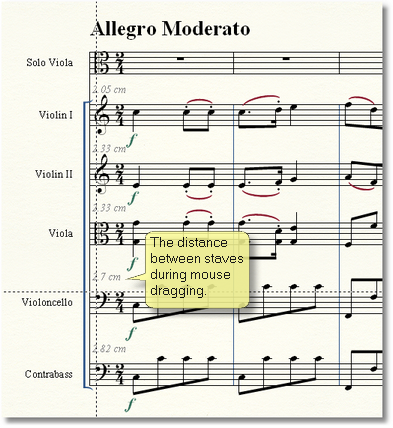 Instead of the sorting and auto-sorting of staves in previous Finale versions, reordering of staves is now handled through the Reorder Staves dialog box: 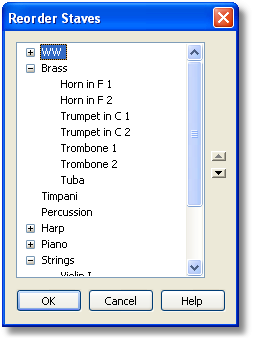 The Reorder Staves dialog makes it very easy to rearrange the score compared to earlier Finale versions. You can reorder the groups or the instruments within a group, or both.

The Staff Usage dialog box has also been modified. This dialog was extremely cryptic in earlier Finale versions and is now much more straightforward. The staves are now displayed in the list as their names and the distances are to the previous staff instead of the top staff.

Please note that third party plug-ins that use staff layout (or even staff system layout) would need to be updated to work correctly with the new Finale 2011 staff design. From a plug-in developer's point of view, the modifications are quite easy to do.

The group and bracket handling has been significantly simpler in Finale 2011 as part of the new staff layout design. Now, groups are created and edited as measure regions.

Since there is no thing like "optimization" anymore, it's now a very straightforward to add or edit groups and brackets anywhere during the notation process

When browsing among the groups in the Group Attributes dialog box, there is now a list of the current group names in the score. That's a huge step forward compared to earlier versions, where there was just a group "ID" as reference.

In the Group Attributes dialog box, there's also a to change the measure span for where the group should be or to just use all measures.

It's not possible to automatically create mid-system brackets (as in contemporary cutaway scores) even with the new group handling. This still has to be done by using workarounds. Since groups are measure-based and there is a staff style to indicate collapsed staves before the group, I think the combination of these two should indeed produce a mid-system bracket - which currently isn't the case.

As a part of the new staff layout design, the Measure Attributes dialog box has also got some updates. 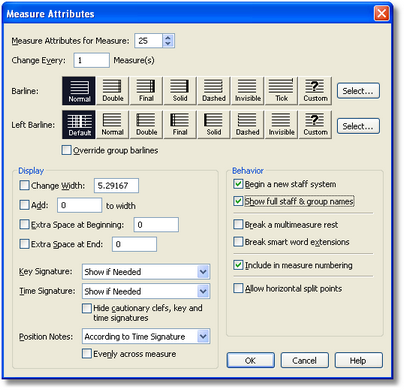 First of all, the user interface has been cleaned up. The controls and check boxes have been visually grouped into logical units related to what kind of elements they control.

There is also a new, but very important, setting in the Measure Attributes: Show full staff & group names. It will display the full names (instead of abbreviated names), if the measure begins a staff system. The obvious use for this setting is when creating multiple movements, which now is almost a one-step process by visiting the Measure Attributes dialog box.  Please note that when this setting is checked, the Begin a new staff system setting is also checked by default, since that's probably the wanted behavior.

The Lyric Tool got a big change in Finale 2011. Although perhaps not as technically different as for the Staff layout, there are still a great number of changes and additions to the Lyric tool.

The lyric spacing has been vastly improved. The major change is that syllables now can expand below subsequent notes if they don't contain a syllable. Old files will still convert as when they were spaced for the old Finale version, but as soon as you re-space the old file, the new lyrics placement will be in effect.

In the Document Options, there's a new option which can further enhance the syllable spacing called Ignore Syllable Edge Punctuation. With this option, you can control which characters that shouldn't "count" as a part of the syllable when the lyrics spacing is calculated. A predefined set of characters is available even for old imported files.

Many updates have been made to the smart word extensions, so they update more accurately and much more efficient. For example, the word extension will stop automatically when you place the cursor within a word extension (even before typing a new syllable). 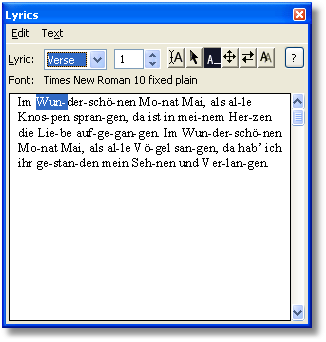 Please note that Hard spaces can now be added (in Windows as well) with Ctrl+Space.

A new drop-down menu has been added for the type into lyrics mode, called Text. The text menu is available in the Lyrics window as well. In this menu, the following things are available:

The Type Into Score mode is much cleaner compared to earlier versions. For example, it updates smoother and the typed text is displayed against the background (instead of against white).

In the Adjust Syllables mode, all syllable handles are displayed at all times. The handles can be group-selected and moved.

There are Auto-Number options in the Lyrics menu which can be used to automatically put numbers before the verses/choruses/sections. In the Document Options, there's also an option that will control how the Auto-Number digits will appear in the document (all number left-aligned at the very first syllable in the piece or each number together with its first syllable).

In Finale 2011, there's a new feature to automatically add or remove Capo chords in the music. The feature works on regional selections, so since the Chord Tool  doesn't support the Add/Remove Capo Chords dialog is accessed through the Utilities menu. 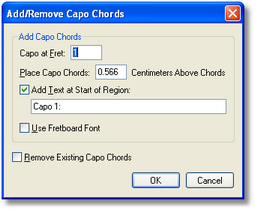 The Capo Chords are added as conventional capo chords and can be edited with the Chord Tools later if needed. The optional text added before the capo chord region is created as a measure-attached text block. There's no additional options to put the capo chords within parenthesis or to change the capo font (with the exception of the Italicize option in the Chord Tool).


This new structure makes it much more straight-forward to use Finale for multiple users on one single machine. The downside is that if you make a lot of customizations to the data files (such as page sizes, default document styles, FinaleScipts, and so on), you have to copy the customization to all users on the computer.

The Finale Mallet font only contains mallets. This fonts is very useful for creating "home-made" combinations of mallets.

However, some of the font characters can also be very useful for other instruments. For example the sine waves characters in the Finale Percussion font: 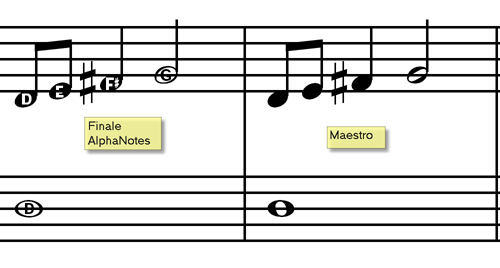 There's also 9 different states of "emoticons" (smileys) as noteheads, which can for example be used to mark individual notes in the piece to make a certain effect. And in addition to that, the font contains some decorative noteheads such as a Halloween pumpkin and an Easter egg.

The whole default look of the score has been changed in Finale 2011. The bright colors are gone, and have been replaced with more toned down colors. The score icons has been redesigned to a new more neutral gray-scale look. The default background has also been modified. The icon for "optimized staff system" is not used in Finale 2011.

The biggest advantages with the new default look is that it's easier on the eyes and it's also easier to get a good impression of how it's going to look in print. The biggest disadvantage is that when editing just certain elements, these elements will not "jump out" on the page as much.

Finale 2011 doesn't contain any feature to load specific color sets. However, the user can of course create FinaleScripts to change between different color sets, just as in earlier Finale versions.

The graphic design of the Quick Reference Guide is more attractive than the on-line reference. Each page containing many screen shots and numerous annotations to explain what each element on the screen shot do.