With this review, I'm trying to give you an in-depth discussion of the new features in Finale 2012 (compared to Finale 2011). It also contains a number of tips regarding the use of Finale 2012.

Please note that this review is based on the Windows version of Finale 2012.

Yes! The distinction between a player and a staff is much more clear in this version. The functionality that's related to how the instrument layout in the score is now assembled in the Score Manager.

Finale 2012 now supports the full range of the Unicode fonts (above the first 256 characters). Files can be saved using Unicode names. For most elements in the score, Unicode versions can be used. Bookmarks, text, expressions, articulations, chords, lyrics, custom smart shapes, repeats, special tools modifications, and so on all support Unicode.

Here's an example of how to use Unicode, where western text, cyrillic text and double quation marks can now be used from one and the same font (in one single text insert).

The three spots in Finale 2012 where I know Unicode support is still not supported are in the Shape Designer, in the non-standard key signatures, and in the EPS support - but there might be some more spot that still doesn't support the full Unicode range that I haven't found.

For Unicode fonts, the Symbol Selection dialog box will expand to the slot where the last character is found. Here's an example with the Times New Roman font: 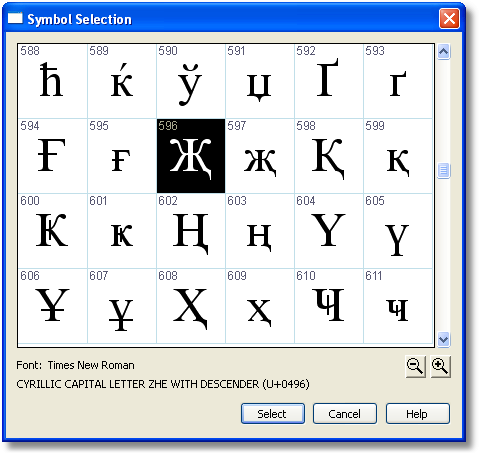 Please note that Unicode doesn't just mean that foreign letters can be used. For example, there are a couple of 3rd party Unicode fonts available for chords, consisting of about 1000 different chord symbols. These fonts can now be fully used, in the full font range.

But also note that for chords, Unicode is supported for the "look" of the chord but not for the keyboard input. So, within the prefix library editor, you can put any Unicode characters into the chord. But you can't paste a Unicode-range character sequence directly in the type-into-score mode.

The Font selection dialog box has been redesigned compared to earlier versions. The layout is simplified (the lists for font name, style and size can now have many more items displayed vertically in the lists) and the old Script setting has been removed, since it isn't needed anymore.

In Finale 2012, there's a completely new sound engine (that handles everything related to audio). The new engine for example has ASIO support. It also includes auto-detection of sound devices.

The Audio Setup dialog box is completely redesigned for the new sound engine: 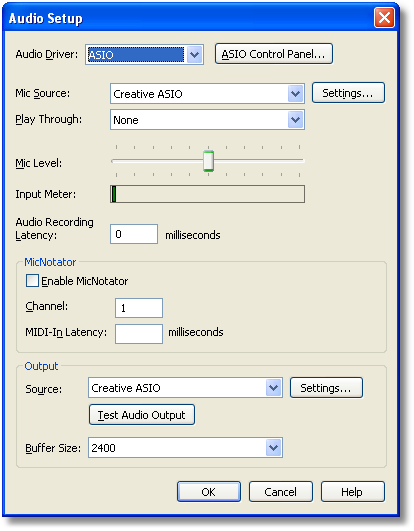 One thing I have noticed is that the new sound engine is much snappier at startup. Finale 2012 doesn't take nearly as long to boot as Finale 2011.

A new document setting, Send patches to MIDI device on playback option is available in the Playback/Record Options dialog box (in the Documents menu).

Finale 2012 introduces playback portability. In earlier Finale version, the playback information was so tightly connected with the staff and a specific playback device that any playback on another device wouldn't be possible without reconfiguration. 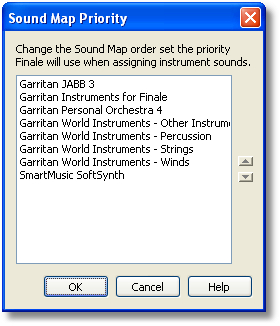 In the Sound Map Priority dialog box you can set the priority of the different sound maps. Finale 2012 will use the order in the list to find the first suitable sound. To tell Finale to scan for the best "playback solution" on the current configuration, use the Reassign Playback Sounds command from the MIDI/Audio menu.

Since sound maps now handle the default priorites on how to playback a sound, all playback device data has been removed from the Setup Wizard. In my opinion, that has simplified the Wizard quite a lot.

The concept of instruments is now very tightly integrated in Finale. Finale 2012 has an internal database of known instruments and some basic information about those instruments (such as the instrument ranges).And the information in that database is the connection between the score and the sound maps.

The database also contain score orders for instruments, which affects where in the score the instrument is going to be placed by default (when using the Document Wizard or Score Manager).

However, the playback portability concept will not get automatic superior playback of the instruments. The sound maps only know about one instrument (such as the violin). There is no way of telling "this is a solo violin" and "this is a tutti violin" when selecting an instrument. So for really balanced sound, the playback sound still has to be selected manually.

Nevertheless, the concept of instrument support is an extremely important addition to Finale, since it will facilitate for much smarter program solutions in the future.

The Score Manager is the panel where all instruments are managed in Finale 2012. This modeless window now contains everything that is instrument/playback-specific about the document and some more. 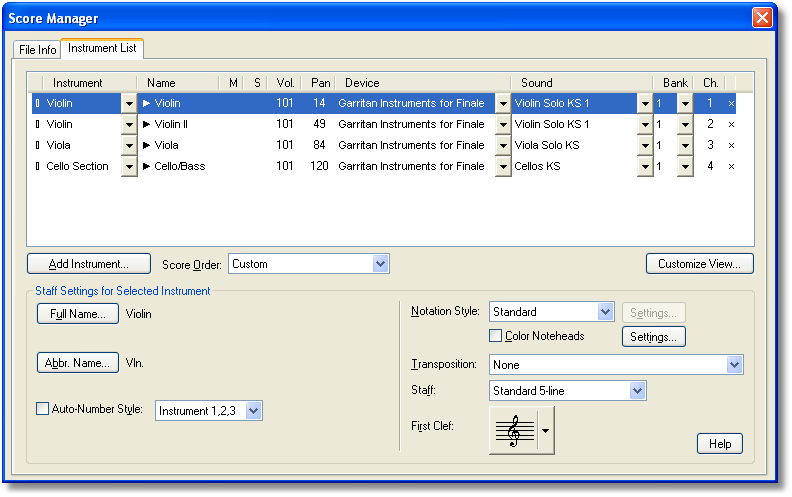 The Score Manager contains the following:

It's very easy to add new instruments using the Add Instrument push button. The new instrument will be placed according to the currently selected score order. However, it's almost too easy to delete an existing instrument using the 'x' icon to the right, since there's no safety question. Undo might become handy!

One of the most useful options in the Score Manager is the Customize View feature. Here, you can filter out the information you don't use, which is a great help.

With the new instrument support in Finale 2012, it's easy to change instruments in the middle of a piece (for example changing from the oboe to the English horn). Mark the measure where the change should appear and select Change Instrument... from the Edit menu. 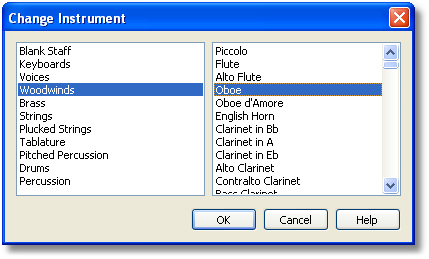 The dialog that pops up will display all instruments that use the same number of staves. If you, for example, want to change the piano to something else in the middle of a piece, oboe will not be listed as a choice - but harp will.

The Change Instrument utility will automatically take care of the playback change. If the playback sound need to be changed, it can be done in the Score Manager.

Finale 2012 supports the PDF file format both for export and import.

Saving the document to PDF file is most easily done by selecting Save to PDF... from the File menu. There is also PDF support in the Graphics Tool, which is discussed separately in the section below.

Compared to a Windows PDF printer driver, the Save to PDF function is much faster. The saving process is almost instant on normal-sized documents, but please note that there is no automated way in the Save to PDF feature to save all parts in a document to PDFs.

When saving to PDF, a number of options can be set. The Information tab controls information text fields, such as Title, Author, Keywords and Creator. The Security tab contains some useful option; the most useful ones are perhaps to disable the ability to print or edit. 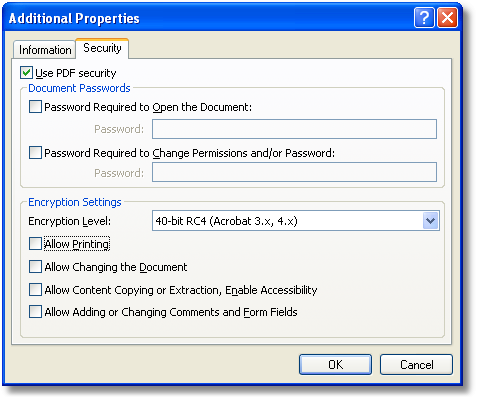 There's a PDF export bug that can appear on certain first measures of a system, when staff reduction of one staff is used, where some elements will be incorrectly positioned for that first measure. It might be very peculiar instances that produce that bug, but I've encountered the bug in a file.

Also, EPS graphics doesn't export to the PDF when the Save to PDF feature. Use PDF graphics instead (which will also support Unicode).

The graphics tool can now import PDF files, just as any other kind of supported graphics file format. For most purposes, PDF would now be a wiser choice than EPS files for imported graphics. If a multi-page PDF is imported, only the first is used as the graphics.

PDF files can be exported, both as region rectangles on a page or as full pages (similar to the Save to PDF function).

The rectangle of the exported graphics can now be moved and/or resized (including restrain using the Shift key) before export. This can greatly improve the accuracy of the area to be exported.

If a pitch name for a specific note isn't available in the font, the notehead remains unchanged.

The  plug-in is identical to the JW AlphaNotes plug-in that's available for download from this site.

The Space System 2 plug-in spaces the systems across a page similar to Space Systems Evenly in the Page Layout Tool, but with much more flexibility and power. It's a redesigned and enhanced version of the old JW Space Systems plug-in. 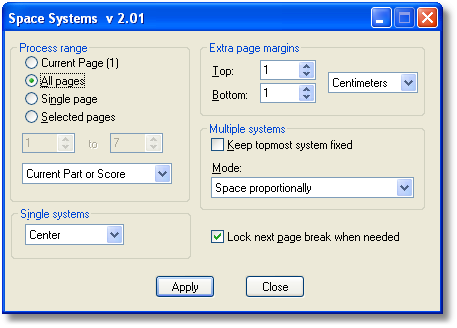 The page selection can be:

The page selection above is combined with a file or part scope:

The extra page margins options can be used provide extra margins above and/or below the systems on the processed page.

The options for multiple systems affects all pages that contains more than one staff system. The Keep topmost system fixed option will keep the top system still on each page. There are several different modes for how to space the systems across the page:

For single systems on a page, the following modes are available:

There's also a setting called Lock next page break when needed, which will add page breaks on the pages that appear after a spaced page. Keep this setting on as much as possible.

Please note that the font use a few characters within the Unicode range, so it will not be fully functional on earlier Finale versions.

The Finale Numerics font is particulary suitable for tasks such as harmonic analysis, Shenker graphs and figured bass notation. It's a serif font and looks similar to Times Roman for numbers and letters.

The font is of most use in the Lyrics Tool and several examples in the documentation shows how to use the font. Both harmonic analysis and figured bass notation are much simpler and faster to do now.

Please note that the font use some characters within the Unicode range, so it will not be fully functional on earlier Finale versions.

If a target application doesn't support the latest MusicXML file formats for some reason, there's an option to save the document to all earlier MusicXML formats (1.0, 1.1, or 2.0). Please note that more and more information from the original document will be lost for each MusicXML version you go back.

Finale 2012 now comes with a pretty extensive library of Repertoire files. The repertoire folders contains 341 files that you can load and examine. (As a comparison, the repertoire folders in Finale 2011 had a total of 107 files.) However, there aren't 341 different pieces; many of the files are arrangements where each part has its own file.

The really good things about the new Repertorie additions are that they really try to show how to solve different kinds of notation within Finale. The Repertoire files are accessed by selecting Open Worksheets and Repertoire... from the File menu.

Here are some interesting files worth to point out in the repertoire library:

Obviously, there are many more examples to check out than the ones mentioned above, so make sure to really look into as many examples from the repertoire library as possible.

The kind of files I still feel are missing from the Repertoire selection are really big orchestral scores and really tightly engraved pages.

Finale can now be purchased directly as a downloadable online version. The full download package is about 2.7 GB (including the Garritan sounds).

A couple of new things have been added to the support of plug-in development, most importantly: