With this review, I'm trying to give you an in-depth discussion of the new features in Finale 2010 (compared to Finale 2009). It also contains a number of tips regarding the use of Finale 2010. The version tested in this review is Finale 2010b.

Please note that this review is based on the Windows version of Finale 2010.

The main difference between percussion in Finale 2010 and earlier Finale versions is that notation and playback now are clearly separated. The Staff Attributes doesn't contain the information about MIDI pitch for percussion sounds anymore.

In earlier Finale versions, you defined the playback note in the staff attributes. What was earlier called "Percussion Map", is now roughly the same as a Percussion Layout -  but without any playback mapping.

The Percussion Layout designer now supports whole and double-whole (brevis) noteheads (in addition to the older closed and open noteheads). With all the playback settings removed from the dialog box, the interface has become very straightforward. The Note Type is the most important setting in the percussion layout dialog box, which is a huge collection of all kinds of percussion instruments you probably will encounter. In earlier Finale versions, this dialog box was sorted by the MIDI note; now you manually sort the order of the notes, which is of importance when toggling percussion notes on the same staff line in Simple Entry, for example.

To connect the percussion to playback, you use an extra column in the Instrument List called Percussion MIDI Map. Here you can select from the available playback setups (such as General MIDI, Garritan Instruments for Finale, and so on). The percussion MIDI map is very simple, it only maps between the Note Type (see above) and the playback note. Please keep in mind that you still must set up the basic playback settings yourself; only selecting General MIDI will not set the change the playback channel to 10 or load the appropriate VST instruments, for example.

If you want to create your own percussion MIDI map, it's very easy and straightforward using the built-in Percussion MIDI Map Editor.

If a document created in an earlier version of Finale doesn't have the correct percussion sounds after conversion, it can be reconverted using the Document/Data Check/Reconvert Percussion Note Types utility.

There's also a new option in the Program Options (the Edit page) that controls how copy/paste works between percussion staves and pitched staves. It will either maintain the MIDI number or the staff position.

In conclusion, the results of the design change (going from percussion map to percussion layouts) are:

Chord input has been simplified. Instead of three different input modes as it was earlier, there's now instead one input mode that can be used with or without MIDI:

Chord playback has been changed. Chord now plays until the end of the measure or until the next chord. Chord playback can be stopped by putting "n.c." ("no chord") in the score.

Since chords will no longer resize depending on the note its attached to, a few more sizing control options has been added. One new document option is available for chord size control. Scale All Chords by which controls the sizing for chords. The document option for setting the sizing of fretboards has also been moved to the Chords page of the Document Options (earlier, it was in the Chords menu); this setting is now called Scale All Fretboards by. Both chords and fretboards can also be resized locally with added resize options in the Utilities/Change/Chords dialog box.

Finale 2010 build further on the concept of categories and the first category-specific features are now available for automatic rehearsal marks.

To create an automatic rehearsal mark style, the expression must belong to the Rehearsal Marks category, and the check box Use Auto-Sequencing Style should be checked.

The following numbering systems are available:

For automatic rehearsal marks to be functional, they should be attached to a metatool so they can be added quickly and effortlessly to the score. Please note that you only have to assign one metatool for a whole style/sequence of rehearsal marks. Finale 2010 use 'M' as the a standard metatool for rehearsal marks in the default document setups. If you want to be compliant with that "standard", define 'M' for your own documents as well.

There's also an option available in the definition to automatically hide measure numbers in measures where rehearsal marks appear.

The automatic rehearsal mark feature is very nicely designed: It's flexible enough to allow for any number of rehearsal numberings systems and styles in a score, it's really easy and functional to use, it fits well within the existing expression tool design and it provides all the necessary functionality.

The support for measure numbers has been greatly enhanced in Finale 2010. 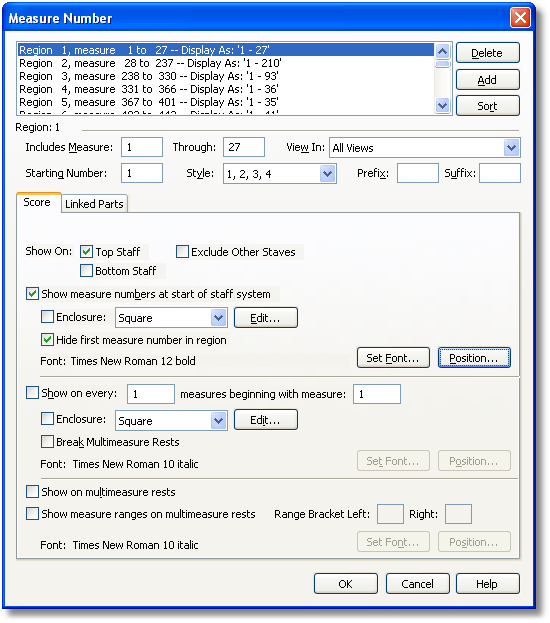 Other notable changes are:

There are a number of additions to the user interface that makes it faster and more flexible to assign staff styles to score/parts:

A new set of fonts are available in Finale 2010, the family of Broadway Coyist fonts designed by Robert Piéchaud. It contains the following four fonts:

The Broadway Copyist font is a much more traditional-looking font than the Jazz font. The dynamics are vertically aligned along the baseline in a similar way as traditional engraver fonts and the text is not vertically displaced as much as for the Jazz font. 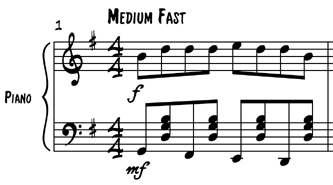 The help system has been updated in Finale 2010: 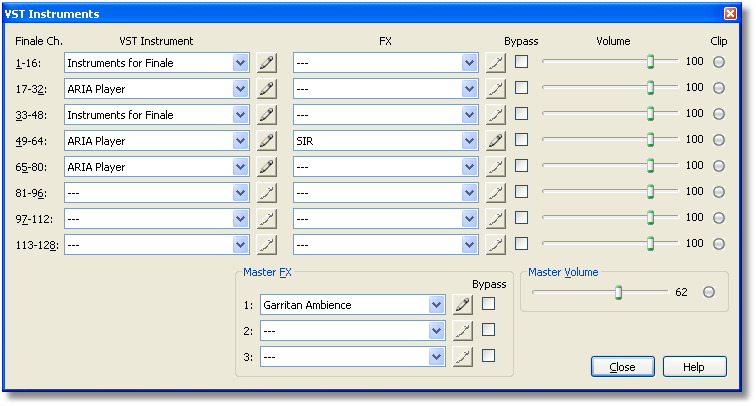 Finale 2010 also supports VST FX plug-ins, for handling tasks like ambience or audio diagnostics for example. Each VST instrument slot can have one FX plug-in assigned to it. The full VST output can apply a maximum of three different FX plug-ins. Any VST FX plug-ins (that would make sense) can be used. There's also options to temporarily bypass an effect.

The only bundled VST FX plug-in with Finale 2010 is Garritan Ambience.

Finale 2010 provides on-screen smoothing of lines and curves, with a technique called anti-aliasing. I believe this is only a new feature for Finale 2010 for Windows, since I think Finale for Mac has this feature since a couple of versions back.

In earlier versions of Finale, the handles appeared as white opaque boxes that sometimes covered too much of the document's visual information. In Finale 2010, a new option is available to display the handles as transparent.

Actually, the new handles aren't completely transparent - they are a bit shaded which makes the handles easier to spot on the screen. It's not possible to turn this shading off, unless you switch back to the old handles.

The transparent handles is a very productive feature which makes it possible to zoom out more and work on bigger parts of the score. It's particularly useful when working with small objects (like articulations or expressions) and when working with end points like for line shapes. But I also find it helpful in tools like the Measure Tool, where the full barline now can be seen.

The Handle Size option has been moved to the View page in the Program Options, to the same group as the new transparent handle option.

Finale 2010 adds these file formats to its graphics file support:

The Lyrics Tool has got a small addition with the Export Lyrics dialog box. It can be used to transfer Lyrics from Finale to another application. 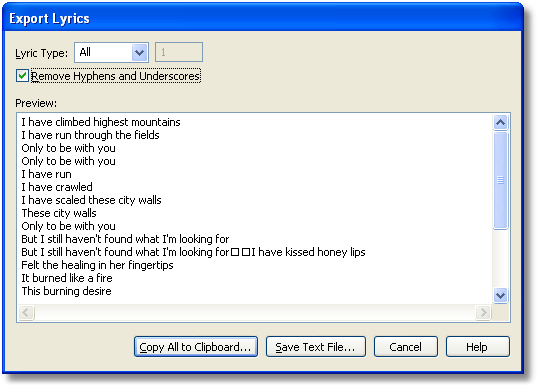 The dialog box has a choice to export either all lyrics or just a selected verse/chorus/section. It's not possible to export, for example, just all the verses.

Each chunk of lyrics gets two line feeds as separators before the next chunk.

An option is available to not include Hyphens and Underscores in the lyrics export, to clean it up for word processing for example. (This is just an export filter option, since the lyrics export dialog doesn't affect the lyrics in the score.)

The Lyrics can be exported to the clipboard (to paste it into another application) or to a text file (to load it in another application). The user interface for the export dialog might seem a bit misleading, since the ellipsis in the Copy All to Clipboard... button would seem to indicate that pressing the button leads to another dialog. However, pressing the button instead leads to another action: it closes the dialog box after the clipboard copying.

In the Text Tool, there's now support for text blocks with hyperlinks. You can only have one link per text block and the hyperlink will always span the full text block.

To activate/test the link, hold down the Control key and click the text handle. (In the Windows version, there's a visual glitch that makes the hand pointer appear to the right of the actual handle. Confusing, but just trust the hand.)

Apparently, this feature will show up in SmartMusic (which I haven't tested). But from a Finale point of view, the hyperlink support could be a really great feature addition if Finale would only export PDFs complete with hyperlinks (similar to OpenOffice for example), but Finale can't do that - so I believe opening the link from Finale using a modifier key isn't simple enough to get the feature widely used.

Finale 2010 (since the 2010a updater) provides a few hundred exercises, available as flash cards or  work sheets. The exercises are loaded in Finale through the Open Finale Worksheet... menu item in File menu.

The worksheets open as regular Finale files, although these files are highly specialized. Some contain only texts, some are designed as printed 2-sided flash cards, some (the ear training) should be printed and then played back, and so on.

The section contains these categories:

Although it might seem that many of these files would open equally well as PDF files, it's actually great to have them as Finale if you want to modify the exercise or if you want to translate it to your own language. I've translated quite a few of these files to Swedish and tried them on my daughter, who thinks it's great fun.

A problem with the worksheet feature is that it opens the exercise files as a named file, so if you're looking for a specific exercise file a couple of times in succession you'll soon replace all the entries in file history list with exercises.

However, the worksheets is a good display on what Finale can be used for, apart from just ordinary music. Take a closer look at the worksheet documents to get some tips on how particular layout tasks are handled.

The MusicXML support has been updated to make use of Finale 2010-specific features, like the new percussion maps, PNG/JPG support and automatic rehearsal marks.

MusicXML import has been improved in these areas:

MusicXML export has been improved in these areas: