To install a plug-in on the Mac:

For Finale 2010 and later and OSX 10.7 and later. This is a multi-purpose plug-in that creates patterns of various elements in the selected area. Version 1.07 has this functionality:

Break - Breaks a chord into a single-note sequence that spans the duration of the chord.

Carbon Copy - Copies all dynamics in the region from a source staff to all other selected staves. It can optionally adjust to areas where the destination has no music.
Hairpins - Creates hairpin marking (or hairpin pair) for the width of the selected region. Old hairpins in the region are removed.
Hairpin Swells - Creates cresc+dim hairpin markings ('messa di voce' markings) on long single notes. Tied notes counts as one note.

Two-state Patterns - Expands a reoccuring sequence that has only two states (an 'ON' and 'OFF' state). Exactly 2 notes/rests must be available at the start of the region.
Numbered Measures - Creates a numbered sequence, one expression per measure, for example for a repeated music pattern. The selected category's font and position info is used.
Delete Numbers - Removes the number expressions that has been added to the region by this plug-in. All other expressions are unaffected.

This plug-in changes existing elements in the Finale document through a general user interface. Filters are available to provide selective changes. A chain of tasks can be built into a custom notation Sequence.

Version 1.03 of this plug-in consists of 203 tasks in 17 different containers:

Requires OS X 10.7 or later, and Finale 2010 or later. A small modeless navigator window that can stay on screen at the same time as the document. It can help with the navigation to specific locations in the documents. For Finale 2010 and later versions. The 1.06 update also includes optional support (through the JW Plug-in Tool) for both windowshade feature and a thin window layout.

It supports navigation to:

For Finale 2010 and later, and OS X 10.7 or later. This plug-in is for documents that use live performance data (if the document is using Human Playback, you need to set "HP (Incorporate Data)" in the Human Playback Preferences). It syncs the live performance data between staves in the document, so instrument in other staves can follow a performance by another instrument. Start time, end time and velocity for the notes are affected.

Mark the target region where you want to sync the live performance data. Mark the source staff for the groove (to sync to) in the plug-in window. The source staff can be a part of the destination region. 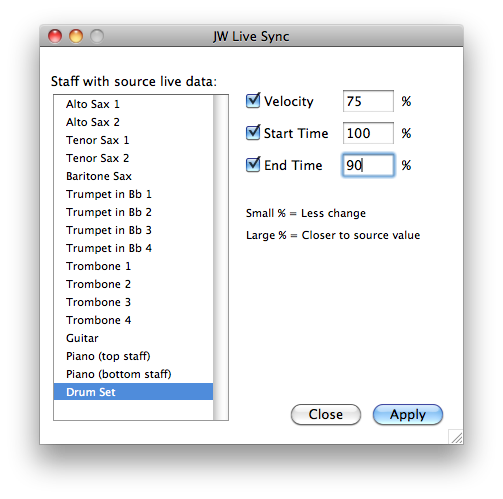 This plug-in will only work with Finale 2012 and later, and OS X 10.7 or later. It maintains text instructions (as text expressions) at Finale 2012 Instrument Changes for the selected region. The positioning and look of the expressions are handled by the selected category, and the plug-in is smart enough to move/remove instructions if the instrument changes moves/disappears. Generally, it should be safe to apply this plug-in on the whole document to keep the instrument changes visually updated.

The plug-in automatically sets the "break multi-measure rest" option in the expressions.

For Finale 2010 and later versions. Requires OS X 10.7 or higher. This is a multi-purpose plug-in for tasks that are related to layers, chord lines and other kinds of music lines or percussion lines that appear throughout the score.

Add - Adds lines of notes to chords or to single notes.
Delete - Deletes a note line from chords. At least 2 notes must be available prior to removal.
Drop - Drops a specific line one octave down.
Keep - Keeps a specific note line while removing the other chord notes.
Rotate - Rotates the chord by moving the top/bottom note an octave. A minimum of 2 notes is required for the chord to be rotated.
Transpose - Transposes a specific note line or the full chord.
Split Unisons - Splits unison intervals into octaves.

For Finale 2010 and later, and OS X 10.7 and later. A completely new design of the Expand Region plug-in, with much more functionality. (The much-more-limited 1.00 version is still available for download.)

A demonstration video of most of the features is available at:
http://www.youtube.com/watch?v=ZmzOQfXfqKI

For Finale 2010 and above, and OS X version 10.7 or later. This plug-in contains 9 different note spacing styles that can be applied easily to a region in the document, through a modeless window interface. A feature to set the selected mode as the default for the document is also available. 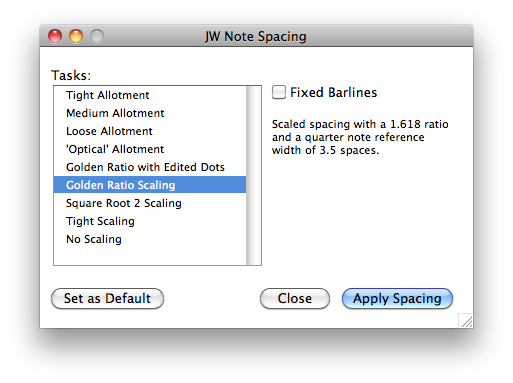 For Finale 2010 and later versions, and OS X version 10.7 or later. A plug-in that changes all notes of one pitch within the region to another pitch. Useful for example for correcting enharmonic spellings in a region, swap note pitch patterns or change tonality. The window is modeless, so it can be opened while the document is edited. 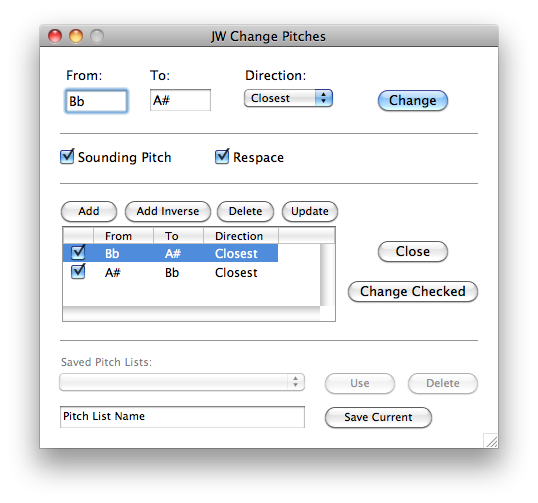 A plug-in for Finale 2012 or later. Also requires OS X 10.7 or later. The plug-in copies a page layout from a source part to the currently displayed part, through an easy-to-use user interface. The measure layout for each system gets locked, so the layout will remain the same in source and destination. It will check that measures are empty before parts with multi-measure rests are copied.

The window (where the source part is selected) is modeless, so it can be open while moving between different parts (or documents).

The following are copied from the source part: 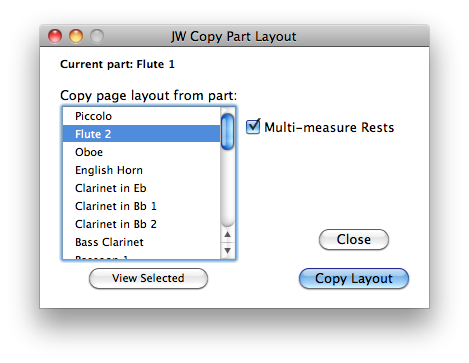 For Finale 2010 or later, and OSX 10.7 or later. This plug-in can create and display staff sets in a list and navigate between the staff sets. Navigation to a staff set can be made in Page View as well. Furthermore, each staff can be named and the staff set names are saved with the document (a category named JW Plug-in Data must exist in the document for this purpose).

When a staff set is created, it inherits the relative vertical staff positions from the selection.

This plug-in also supports windowshade, a feature which can be turned on by using the JW Plug-in Tool plug-in.

For Finale 2010 and later versions. Requires OS X 10.7 or later. This plug-in spaces multimeasure rests and/or single rests relative to their duration, making parts with many rests much more professional and easier to read. Multimeasure rests can be either spaced according to the number of measures or to their durations (in beats). The existing music scaling factor for the document is used. Version 1.01 adds the ability to apply to all parts at once, and to redistribute the existing rest widths (for existing layouts).

Here's a YouTube video displaying how the plug-in works:
http://www.youtube.com/watch?v=5Ja-ECO-X0s

After (after applying the plug-in):

For Finale 2010 and later versions. Requires OSX 10.7 or later. This is a plug-in for manipulation/editing of measure number regions and measure numbers. It has the following features:

For Finale 2010 and above. Requires OS X 10.7 or later. This plug-in helps to find and correct cautionary accidentals in the document. It works differently than other cautionary accidentals solutions for music notation software, since it first provides a list with suggested accidental changes. In the next step, the user confirms which of the changes that should be made.

Creates pop/jazz "topline notation" for chord instruments. Apply the plug-in on a region with written out chords that you want to display as topline notation. The playback will preserve playback of the chords and makes sure that the extra stems are at least one octave long. Also includes a "revert" function to get the written-out music back.

For Finale 2010 and later. This plug-in (a "Seinfeld"-type of plug-in) does these tasks fully automatically:

The plug-in auto-detects the tremolo articulations, so it can be run on sections without tremolos as well.

Tip 1: To change side of a whole note tremolo, flip the "invisible stem" of the whole note with Simple or Speedy entry.

Tip 2: If you use Patterson Beams or any similar task, run these kind of tasks before applying this plug-in.

It supports the following fonts:

(Requires OS X 10.7 or later.) This plug-in adds or updates grace note slashes on beamed groups, taking the angle of the beam into account. It follow the same rules for adding slashes as flagged grace notes do. If you change grace note document options or the appearance of a beamed grace note group, please run the plug-in again to update the slashes.

If no slash appears, make sure that either the first entry in a beamed grace note pattern is set to use a slashed grace note, or use the "Always slash flagged grace notes" Document Option.

Put pedal up/down markings where CC64 MIDI controller events are found. The pedal markings are put in the score as articulations. It's quite a quick hack: one current limitation is that you must have definitions of the pedal markings (as Maestro) in the articulation list before you start - otherwise nothing will show up.

For Finale 2011 and above. This plug-in is a diagnostic tool that lists a staff's percussion layout and links it to the mapped playback, staff position and GM/default. The contents in the list can be sorted.